The August Bank Holiday Monday is braw. In my particular part of Scotland, for most, this is a normal working day with the September Weekend taking precedent but for the rest of the UK, including me, it is a day where everything truly shuts down. That is everything bar the football and as such I have now made a habit of firing up the Groundhopper App and seeing what’s within a comfortable day’s reach.

Workington AFC, situated towards the Cumbrian coast, has long been on my radar and on discovering that they were to be at home to the wonderfully named Pontefract Collieries I booked my train tickets to head south of the border on what turned out to be a wonderfully sunny day.

Being a city boy it always strikes me how much towns such as Workington completely shut down during these days with the ten minute walk from the station to the ground feeling like a cut scene from Shaun of the Dead, the streets empty and doors closed. To be a resident on days like this would certainly take some getting used to but I knew I had dealt with any concerns about not being able to get a couple of pints during some pre-match scouting which revealed that the Tony Hooper Bar located inside the ground would be able to provide exactly what I was looking for.

I was even more grateful when it was announced that the visitors had been delayed by 45 minutes as a result of traffic and so, as I sat down to my second fruity cider of the day I decided it was time to deal with the real reason I was here, so without much further ado let’s rate some pie! 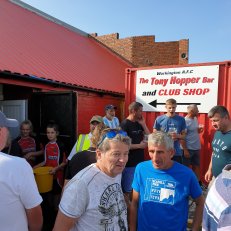 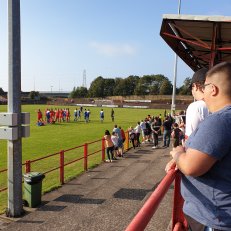 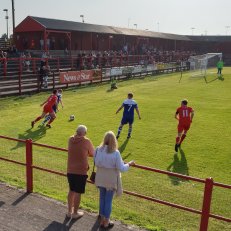 Price: Much like in the case of the Bohemian’s Pie there was an option to turn my single pie into a proper feast with a Steak Pie being served with chips, peas and gravy for just £5. A deal like that is an insta-take after a couple hours of travelling.

Presentation: This meal came in a long, rectangular, yellow polystyrene box with cutlery and napkins available on a table beside the service window located in the bar. 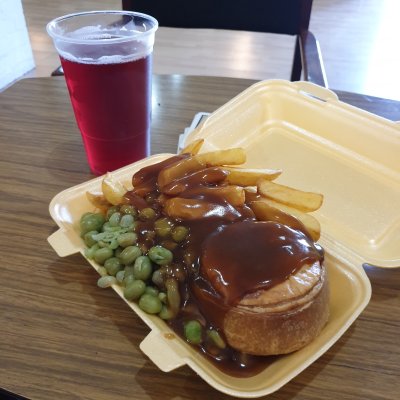 Meatiness: I had a slight worry as I went in to consume this pastry driven by a conversation between the person ahead of me in the queue and the kiosk proprietor who had suggested that it would be better with the gravy as the steak pies had come out “a bit dry”. It was a concern rightly shared because as I pulled apart the pastry with my plastic knife and fork it became clear that there was indeed very little gravy held within.

The meat was nice enough, fine strands with a slight hint of ale on the tastebuds, but it was indeed pretty dry and I soon found myself dipping my forkfuls into the pastry’s gravy surroundings. Tasty but perhaps needing a little more filling and a little less baking.

Pastry: The pastry had a good colour on it and proved to be a robust foe against my brittle cutlery. There was some boil out, again hinting at the dryness within, but the gravy helped soften everything although the bottom was not forgiving and I ended up picking that up like a form of meaty biscuit to make consumption much easier.

Brown Sauce: No brown sauce needed here thanks to the generous ladles of gravy, and side of mint-tinted mushy peas. The chips, which I should probably mention here, were fine.

Overall: Bit dry but gravy saved the day whilst paying just a fiver for a full lunch is value that can’t be sniffed at.

Gravy Factor: Glad it had some.

A decent pie was accompanied by an enjoyable game at Borough Park, with the home side running out 2-1 winners, the last ten minutes being particularly entertaining as the referee totally lost control of the game.

Next up I’m in Scotland’s capital where the women’s national side started their Euro 2021 qualifying campaign against Cyprus at Easter Road. I was working, but I still managed to snaffle a pastry.