Have we all got that festive feeling? I know that you will have lathered your turkey in gravy, consumed a round dozen pig in blankets and developed a lactose intolerance after downing a full cattle’s worth of cheese but I think we all still have room to squeeze in a little meaty treat. Welcome to the latest edition of Meat Filled Pastries from the world of Scottish Football. This week we head to Ayrshire and to Bellsdale Park, the home of Beith Juniors, for a steak pie or two.

Bellsdale Park, as well as being renowned for its pretty strong pastry game, is even more famous for its very pronounced slope. Whilst Hibernian were required to flatten their Easter Road pitch back in the early 2000’s, the Bellsdale slope continues to endure. Often the topic of many a terrace conversation you first become aware of the park’s downhill tendencies as you make the approach to the ground with it being near impossible to leave the centre of town without gaining some downwards moment. This suspicion becomes a realisation as you enter and make your way through the turnstile, the two covered enclosures on the far side appearing to move further and further away from pitch level as the grass sweeps down towards the far corner.

I’ve been to Bellsdale at least a dozen times or so over my football watching career and I still find myself amazed that somebody hasn’t said they need to fix it, especially given their recent forays into the “Big Scottish” but I like it. It has character. There is no doubt some sporting advantage to playing down the slope in the second half during a mid-winter battle in the pouring rain whilst the opposition trudge upwards in the opposite direction – a mild exaggeration of course – but whilst the commerciality of new build all weather parks has its merits grounds such as Bellsdale Park need to continue to thrive to ensure those points of differentiation remain on the terraces across the country.

You know what else needs to continue to thrive? Tasty pastry treats. But was the steak pie from the home of The Mighty worthy of the side’s nickname?

Well without, much further ado, let’s rate some pie! 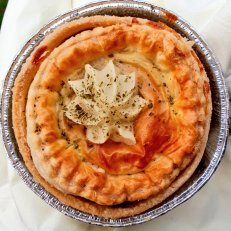 Price: At £2 this was towards the top end of the junior football pie pricing spectrum but within the same range as other luxury offerings across the grade. The same price as their previously reviewed Chicken & Haggis Pie (see picture above) which still remains one of the tastiest match day treats around.

Presentation: In the list of things I bang on about the lack of proper advertising by butchers and bakers that they provide the goods is right up there, so imagine my delight that Irvine’s Bakery continue to supply Bellsdale Park with large cream coloured napkins with their name emblazoned across it. The pie itself was contained within a tin foil case which, as we all know by now, is not uncommon when presented with a steak filled pastry.

Meatiness: This pie was awash with gravy, savoury in flavour and from a consistency perspective near spot on, allowing me to squeeze the top and bottom to show a little ooze without a single drop being spilled to the gravel below. Especially impressive considering the deep fill that had been executed by the baker during construction. The meat was tender and had a nice variation of small and large chunks, tearing away in strands like a good steak bite should. For some it might feel a little over seasoned, but for me, once married up with its pastry surrounds it made for a tasty steaky mouthful.

Pastry: Anyone who has read some of my reviews from the senior game in Scotland will know that the tin foil case is often the scourge of a good steak pie so I was naturally nervous as I slipped my fingers around the edges and went to pick my pastry up. This nervousness was almost immediately alleviated though as the pastry popped clean out, the base golden, the sides intact and the top still glistening, although perhaps a little ragged in its placement. A small note on what was otherwise a very solidly constructed pie. 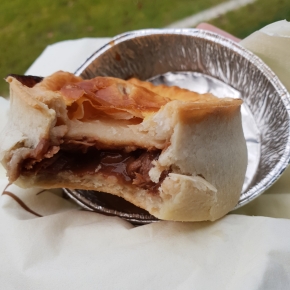 Brown Sauce: Would have been utterly superfluous.

Beith really is the place to be if you want some of the finest football pies around, it is genuinely one of the highlights of my fixture calendar. I’m hoping to squeeze another pie based jaunt in before year end but whether the review makes it before the dawning of 2019 we’ll have to wait to see, so for now I hope you all have had a very Merry Christmas and are looking forward to a happy and prosperous new year.

Oh, and of course, go forth and eat pie!

Chris Marshall, is a BJTC accredited Radio Journalist with an honours degree in Communications & Mass Media from Glasgow Caledonian University. A contributor to various football websites and publications he also currently acts as Heart & Hand Podcast’s resident Iberian football expert and hosts “The Isco Inferno” a weekly take on all things Spanish football. A perennial ‘Scottish Sporting Optimist’ and part-time Madrileno with a passion for food and football that has manifest itself in the wonder that is Meat Filled Pastries.