Hello pie fans and welcome to the second review from the Scottish Highlands as we dive into, what turned out to be, a rather substantial scotch pie offering from Logie Park.

If you want to read about the epic steak pie from the same venue then you can do so here, that one was definitely worth the 400+ mile round trip but before we find out if it was a day for double delight I wanted to give you an insight into that journey, one that very nearly resulted in an overnight stay in Forres itself.

The day started early, arriving at The Quiach, the regular post match watering hole for half eight with a roll and coffee in hand. There is a regular bunch that take the bus to these away games, and our numbers were boosted by an extra few who wanted to leave their cars at home and enjoy what had turned out be a first trip north in over five years.

The drive north was fairly uneventful, we rolled into town a couple of hours before kick off and quickly assessed our surroundings in search of the nearest pub knowing that the ground itself, which was situated on the outskirts, had no social club to fall back on. Having had a few in The Thistle Bar we boarded the bus and headed towards the ground which was situated at the end of a cul-de-sac in a residential area. There was no parking to speak off and so our driver Wullie made the bold – and what soon turned out to be foolhardy – decision to go off road and park up on the grass, 45 seconds later the bus was stuck.

The rain had been falling heavily the night before and in spells throughout the journey and whilst a couple of cars were already in situ there was a suspicion as the wheels moved away from the safety of concrete to swampy grass that trouble was imminent.

It was. The wheels spun, and spun, and spun, the engine grunting and moaning as the gears were cranked over and over. Still in our seats we could feel the bus slip deeper and deeper into the mud, a look out the window showing the carnage being caused. We disembarked and did the only sensible thing by making our way into the ground hoping to resolve it at half time leaving a gaggle of bus drivers to get started. 45 minutes later, it was still stuck, and with Wullie looking more and more a broken man a few of us headed out and after some digging, some pushing and the snapping of at least two tow ropes (unused seatbelts) the bus was free, our camaraderie strengthened with the path home secure and our shoes a little muddied.

The trip itself was made by that bus story as the game was very little to write home about but as we made are way back towards the gate it was fair to say we had earned ourselves a pie. So without much further ado, let’s rate some pie.

Price: £2. I’ve noticed this is becoming a bit of a recurring trend where no matter the type of pie the price for each remains the same. £2 for a scotch pie is quite high for this level but then counter that with that being the same price as the steak and it all kind of balances out.

Presentation: Same as the steak on a double layer of kitchen roll. 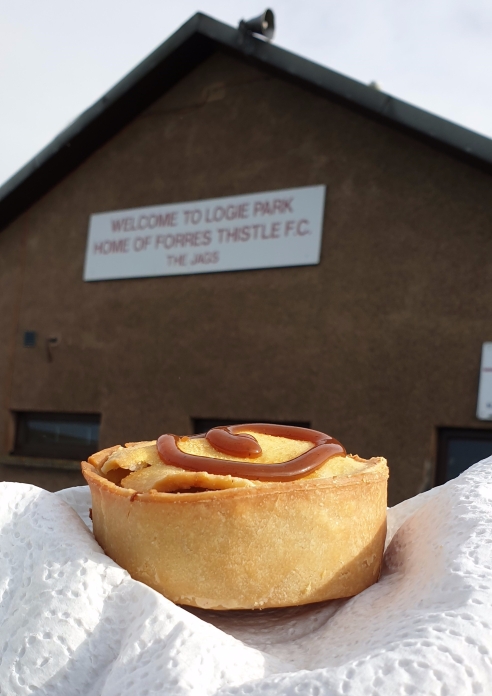 Meatiness: This pie was a whopper but quantity doesn’t always mean quality and to be honest I was a little bit disappointed with this one. The texture was what you would expect to see in a good scotch pie but my filling was a little cold meaning the flavours didn’t pop as much as you would want them too. The meat was a little pale and grey meaning that when eating your eyes that sense too felt a little underwhelmed.

Pastry: Much like the steak the top was a little loose from around the sides but it had a nice golden colour to it and held the substantial filling comfortably.

Overall: A big lump lacking a little a punch.

Think you have what it takes to be a judge at this year’s World Scotch Pie Championships, then luckily for you the organisers are running a competition which will see you become a judge for the day, details of which can be found below.

Next time out we are back in Ayrshire to cast our eyes over the Irvine Meadow Macaroni Pie. Until next time, go forth and eat pie!

Hello and welcome to Meat Filled Pastries, this latest entry to the Pie Hall of Fame comes to you on Non League Day, a day where, with Scotland’s international exploits causing optical bleeding across the country, fans are afforded the opportunity to seek relief and turn their attention to the lower leagues of Scottish football.

Meat Filled Pastries was set up with a view on shining a light on these clubs, the players who graft by day and then train hard at night, the coaches who become WhatsApp admins and fine arbitrators, the fans who stand in the wind and the rain, who share pints in strange little corner bars with their chosen travelling few, the volunteers who line the park, run the gate, bellow out the prizes on offer during the half time draw and of course, dish out sustenance to the ravenous hoards from kiosks of all shapes and sizes. Every one of whom are happy to call the beautiful game their mistress.

With the gap between the rich and the poor ever widening, with the relationships between those at the top and those in the terraces becoming more strained and distant I am forever grateful to the home that non-league football has provided me to embrace my fandom. If you’re reading this and still not decided to head to a game today then I encourage you to fire up your mobile and see what’s on offer near by.

Or, if you prefer, a bit further afield, something I found myself doing a couple of weeks ago as Pollok made the trip north to face Forres Thistle in the Scottish Junior Cup. There will be more on that journey in the next review but naturally, after having had a few beers, I headed to the hatch and made my order. 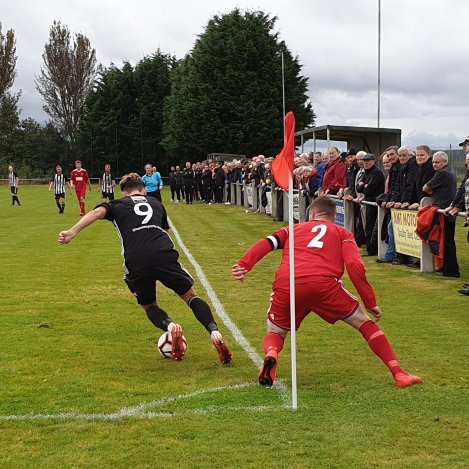 Price: £2. An acceptable price for what was going to turn out to be an absolute belter of a steak pie.

Presentation: A double sheet of Kitchen roll. I assume more cost effective than a napkin but, having not yet fully investigated the finances behind this important part of the match day consumption process, an assumption is all that can be made. Either way those two sheets did the job required handily. 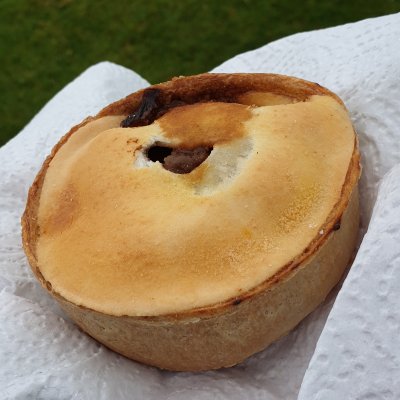 Meatiness: Oh my, this was love at first bite. First the gravy, luscious and highly seasoned with a consistency that as you squeezed the pastry lid and base together gently let out a contented sigh of gravy, bulging the same way a full belly does after the belt has been loosened on a pair of trousers following a wholly satisfactory meal. The meat was tender and in generous sized chunks, toothsome, pleasingly tearing away from each other in strands exposing a wonderfully coloured steak still sporting a slight hue of pink. Multi-levelled deliciousness.

Pastry: Was it the prettiest pastry I had ever seen? No, the top was a little loose with the steam hole at the top showing signs of boil out as I peeled a salty sliver of what I like to call “gravy jerky” from the surface but it was beautifully baked. Thick enough to hold the filling but not too thick so that you end up with a raw inside coating with a lovely golden tinge all around. 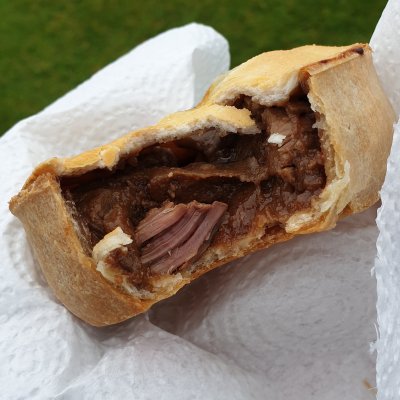 I’ll be back with another review from Forres as I share what was an interesting match viewing experience.