“…and then in the distance I could hear the roll of a shutter, the chatter of a forming queue. As I turned my head I gazed at the pie hut beckoning me with all its meat and pastry glory. A culinary siren song wailing in my ears, my initial despair turning to joy as the first pie of the 2015/16 drew ever near. I took my first bite and lo’ it was good.”

Meat Filled Pastries is back!

Now I know last time out (after reaching the magical ton) I said that I was retiring from the pie reviewing game so that I could focus on writing a book. I had become a little jaded and felt like the time spent on the website and its associated projects was stopping me pursuing some other interests. However after a month without the pressure of pie and a bit of better planning on my part this year I find myself rejuvenated and once more ready to bring you the best sporting pies around.

I also started coming round to the idea that keeping the website going will actually help in putting the book together, giving an underlying theme to the story so far. It means it may take a bit longer than planned, but by putting in a long-term strategy I hope it’s going to turn out to be a good wee read. The pre-ambles this season will be replaced by excerpts/updates on the book, a promotion ahead of time kind of deal plus should help keep me in check when it comes to actually finishing it.

So without much further ado, and for the first time this season, let’s rate some pie! 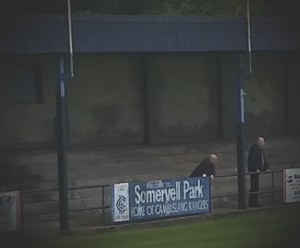 Price: It may be a new season but it’s nice to see that you can still get a meat filled treat in exchange for a solitary golden nugget. £1 for a hot lunch is a bargain no matter where you go.

Presentation: Continuing the renaissance theme, this pie was presented on a medium-sized white napkin with the added bonus of a second layer. I imagine this was a deliberate ploy by the purveyor of pie to help protect your (and his) hands from a pastry fresh from the oven.

Meatiness: This was a very moist pie, at first when I held it I was concerned it was going to be swimming in grease but thankfully that wasn’t the case. It had a sweet after taste that usually indicates a pie with a high onion content, although that wasn’t visibly present, and on this occasion there was no kick of pepper. The texture was a little disappointing as the filling quickly turned to mush once it had entered your mouth as opposed to holding together for a little while. Take some of the moisture out the centre and you have a decent little filling here.

Pastry: This is where I felt the pie let itself down a bit. On the face of it things were very good. It had nicely golden crispy top edges and the base was well cooked and remained intact throughout. The problem, oddly, was the sides where small patches of perfectly smooth and hard pastry were to be found leaving a weird feeling on your tongue. The best comparison I could give was that of an uncooked pork rind, it’s a shame as the rest of pastry was very good.

Brown Sauce: Tangy and Sweet. I recognised the large unbranded cylindrical bottle almost instantly as one of those often found in high street frozen food stores. Did the job. (Note: I don’t know if I’ll keep this section going forward, it’s a pretty hard thing to right about creatively).

Overall: Very moist, quite sweet with a well-baked pastry in parts. The texture though was a little bit odd both inside and out.

Gravy Factor: Whisk out the lumps from that thickening agent for a little bit longer and you could be on to something good.

S0 there we go. 101. I have no real targets from here on in other than getting the book done anything else that comes my way I’ll be sure to let you know.

Until next time, go forth and eat pie!