With the regular football season now officially over, and the World Cup in Russia upon us now seemed as good a time as any to add another chapter to the International Soccer Scran Special Series, a long overdue summary of my trip to Bavaria and in particular the Max Morlock Stadion in Nuremberg, a footballing stop off during a stag weekend that took us to Munich and Augsburg too. In fact the initial plan was to head to the Bavarian Derby between the two aforementioned clubs but an imminent Bayern title party in Swabia coupled with the German fans renowned for selling out grounds meant that tickets were hard to come by and whilst some were acquired there was not enough to facilitate the entire group and so Plan B was formed and a day in Nuremberg awaited us. So without much further ado let’s get elbow deep in a world of pretzels, tiny sausages, beer and some coverage in a local news outlet.

Nuremberg is situated an approximate two hour train journey from central Munich. There is a “slow” train and a “quick” train that takes you to and from Bavaria’s biggest and second biggest cities. Unsurprisingly the “slow” train is a bit cheaper and, even cheaper still if you’re travelling in a large group, with our fare tumbling from around 80€ per person to just 15€(ish). Although we did eventually get the cheaper fair we hadn’t planned the journey very well and so on the slow train we arrived into Nuremberg’s main station just ten minute’s before kick off. The fates started to turn in a favour though as on exiting the station we were greeted by a thankfully quiet taxi rank and a short 15 minute ride later, which passed a game between the home town teams youth side at the side’s training complex, we had arrived at the Max Morlock Stadion. 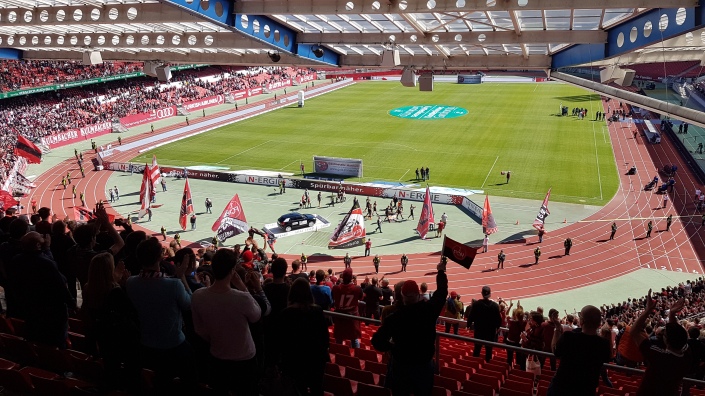 The ground is like many stadia in Germany serviced with a running track with the main stands to the side providing a closer view whilst the oval curves at the end providing views, that whilst a bit further away, are excellent values for money. Having taken the stairs to our seats in the top deck I was intrigued by the view through the plexiglass to an open piece of land behind the stand. Luckily somebody more up on their history than me identifed this as The Nuremberg Rally Grounds, home to a decades worth of Nazi propaganda. The stadium itself used as a hosting ground for the Hitler Youth and Nazi centric sporting competitions. When you think about the many modern stadiums built beside wasteland, industrial estates and shopping centres on the edges of cities and towns this trip to Nuremeberg led to a surprising and unexpected moment of reflection back to very different times. 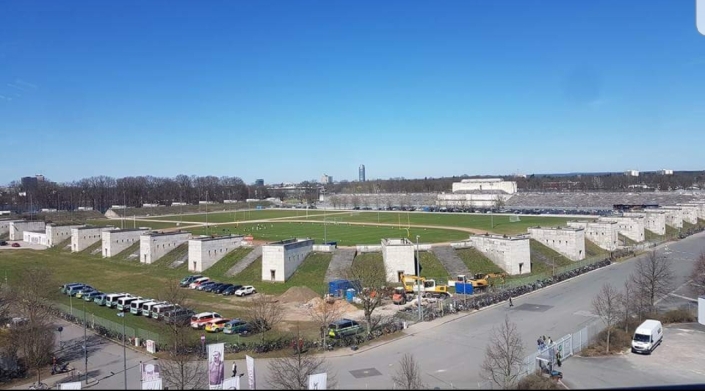 Eating Outside the Ground

The Max Morlock Stadion, as previously hinted at, is situated a decent distance away from the main centre of Nuremberg and with very little around it so if you do have a preference for snacking before going to a game then I’d suggest hanging out in the centre where you have your expected mix of Bier Halles and high street restaurants. Beside the main station there is an interesting historical looking (although I suspect very modern) little conclave with some shops, cafes and bars. There’s plenty of options to choose from but I suspect a review of Nuremberg city centre is not what you came for though so let’s get out that taxi and into the ground.

Eating Inside the Ground

Entry into the stadium is via a gated perimeter which, one navigated, presents you with a decent selection of food and beverage options. As this was a stag do let’s start with the important stuff, an item close to every Bavarian’s heart, the beer. Firstly, and this is a strange thing to have to call out, they are alcoholic and can be taken into the stand with you. Served in a rather nifty branded plastic up, emblazoned with the 1. FC Nürnberg crest. A bit of further reasearch showed that this is a fairly common theme at grounds across Germany. I found myself thinking that if it wasn’t a) so fragile and b) be absolutely minging by the time you got it home, it would make a nice souvenir of your trip. I’d love to give you a price per pint but stag do’s aren’t necessarily the place for that kind of detail although if you had to push me I think it was around the £4 mark. Expensive but about average when you are part of a captive audience. 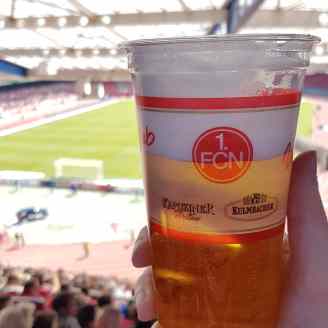 Your main food options were, also refreshingly traditional, pretzels and sausage. I think it’s fair to say that you’ve not really experienced a pretzel until you’ve been handed a face size Bavarian version of this baked good. There were two varieties that I could see. Plain, dusted unmistakably with salt, and cheese. Naturally, I conspired to try both and whilst each provided that combination of soft white dough and chewy dark brown crust that anyone who has ever had a soft pretzel will know the cheese version provided that extra level of flavour that the plain salt didn’t have. The flavour profile enhanced by those crispy bits that only cheese can provide when it catches on the bottom of the tray. They really are the ideal snack/hangover meal replacement to go with a beer. 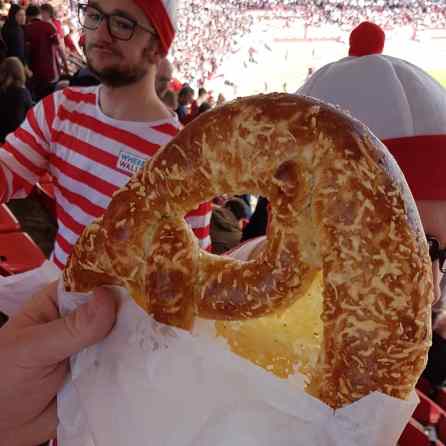 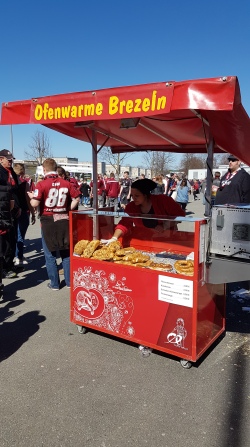 Post game and with the beer hunger still rumbling on I made use of another kiosk situated on the perimeter of the stands and had a roll and sausage. Not square, as often found back home in Scotland and neither large and long like the Bratwursts and Bockwursts of your Germanic dreams but a more local speciality known as the Nurnburger Rostbratwurst. Three of them to be precise, tidily stuffed inside a simple white bread bun like a trio of meaty soldiers and (when you actually manage to locate the condiments) topped with ketchup and mustard. Like their much larger wurst brothers these are usually grilled however their differentiation in flavour is the addition of marjoram to the sausage mix. Although the sausage is much smaller, meaning that the casing to meat ratio is drastically increased I enjoyed the more regular pop that these tiny, tasty bangers provide. 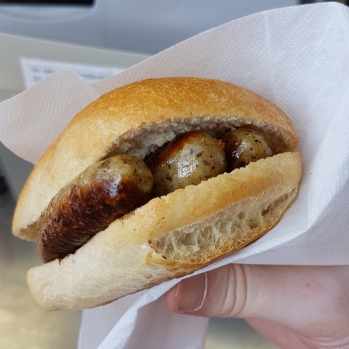 German football is often championed as the crème de la crème in relation to a fans match day experience and with cheap tickets, noisy supporters, proper beer and a wide range of food options it’s easy to see why. It also, like football across the globe, gets covered extensively from the very bottom to the very top. Sometimes the local press will even grab a bunch of drunk Scottish folk in Where’s Wally outfits and ask them what they are doing there. So if your German is half-decent, and you want to see what our man Jambo made of our day then you can do so here.

I had been to Germany a couple of times before this and somehow managed to conspire to not get to a football game so this was a good day for checking things off my footballing bucket list. Overall the version of Bavaria that I saw during my long weekend there played very much into the stereotype of beer, beer festivals, sausage, pretzels, and just when you think you can’t manage another one more beer (and sausages. and pretzels).

Next up I’ll tackle my biggest International Soccer Scran piece until last as I do a retrospective on my time in Madrid both last year and for a few days this covering games from the Bernabeu to the Polideportivo Vicente Del Bosque and everywhere in between.

However until next time go forth and eat pie (or pretzels!)

Chris Marshall, is a BJTC accredited Radio Journalist with an honours degree in Communications & Mass Media from Glasgow Caledonian University. He has contributed to prominent football sites including Pie & Bovril, The Terrace Podcast, The Football Pink and The FBA’s as well as featuring in The Scotsman, STV and a number of other media outlets. A perennial ‘Scottish Sporting Optimist’ and part-time Madrileño with a passion for food that has manifest itself in the wonder that is Meat Filled Pastries.