Hello pie fans and welcome to the latest perusal of pastry brought to you by your friends at Meat Filled Pastries.

It would be easy to drone on about the weather to start this week’s blog but personally I find the discourse tedious and discarding the fact that Scotlan’s climate isn’t prone to bouts of heavy shiteness at least ten months of the year is a convenient way to fill up a few paragraphs with no match action to call on. Surely the free time that the players now have could be used to conduct long form interviews or go more in depth on previous game analysis, but why do that when you can smash the words SUMMER FOOTBALL repeatedly into your keyboard instead.

As part of this week’s introduction I want to plug the new series of A View From the Terrace, which I’m currently working on, and in particular the VT featuring BSC Glasgow from last Friday’s episode which is linked here for eternity. It’s genuinely fantastic and not only does it go behind the scenes at the club ahead of the biggest match in their short history but it also features a goal from Meat Filled Pastries very own Ross Smith. I recommend watching it.

Back to the weather for the briefest of moments and the conditions have led to me hitting the road a bit more recently although as it continued to rain sideways I decided to stay close to home a couple of weeks ago and head to Hampden as Queen’s Park hosted Elgin City in Scottish League Two. 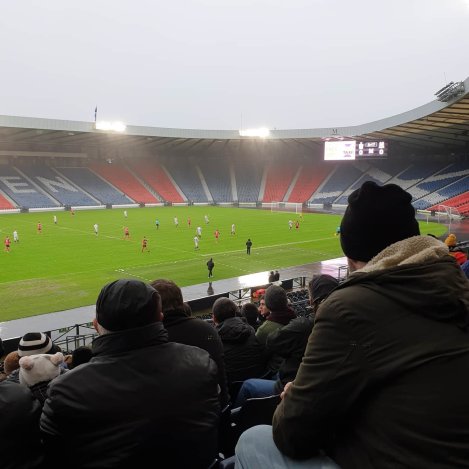 Price: £2.80. As always at Hampden the surroundings come with a hefty price tag. I also had a Haggis, Neeps & Tatties Pie that was identical to the offering recently had at Ibrox, but was 60p more expensive. I would hope with the future move to Lesser Hampden the pricing will move in line with the level of competition the side are competing in.

Presentation: Pretty standard at large stadia in that it came within a tin foil case and on top of a small square white napkin.

CheesyBeaniness: I’ve spoke in the past about my lack of love for the Queen’s Park Cheese & Onion Pie, so I approached Hampden’s vegetarian offering for the day with a bit of trepidation, a trepidation that would prove to be not entirely unwarranted. The consistency was the same as on that fateful afternoon, thick and gummy. The paste accompanied with an acrid kick of pepper on the back of the throat which had my hippocampus lurching back to bites of time past. There was the sweetness of the beans to play with this time although their presence was miserly and when an ingredient as humble as the baked bean can’t be splashed about then something isn’t quite right with your pie’s construction. 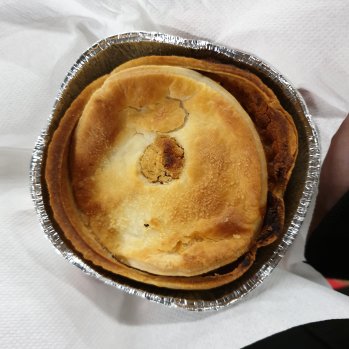 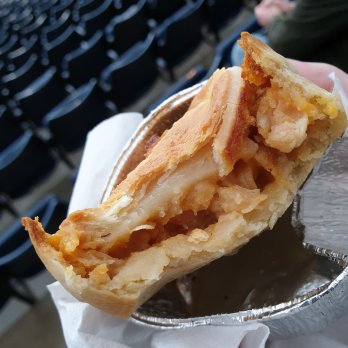 Pastry: A bit smashed up on delivery the top was loose and as can be seen by the first bite images the sides bucked a little underneath the biting pressure of my jaw. It was nice and crispy though, had a decent colour and mercifully was not stuck to the bottom of the case.

Overall: Not the greatest but an improvement on the Cheese & Onion Pie that still haunts my dreams. The providers need a lot more beans and significantly less pepper in the base mix used to throw these vegetarian offerings together and I would say that non-meat eaters deserver better.

The curse of the big stadium continues, next time out we head to Alliance Park, home of Caledonian Braves, as they host Lowland League title chasers Bonnyrigg Rose Athletic.

Chris Marshall, is a BJTC accredited Radio Journalist with an honours degree in Communications & Mass Media from Glasgow Caledonian University. Editor of Leading the Line, A Scottish Women’s Football writer and a contributor to various football websites, podcasts and publications. A perennial ‘Scottish Sporting Optimist’ and part-time Madrileno with a passion for food and football that has manifest itself in the wonder that is Meat Filled Pastries.