It’s another wonderful day to read about pie, and it’s the return of a personal favourite of mine in the form of the Macaroni Pie, this time from the West Region Juniors as Irvine Meadow took on Pollok in a top of the table Premiership clash.

Medda’ Park, or Meadow Park if you are a believer in the use of renounced pronunciation is one of the few venues in the West to have a seated stand and it is perhaps for money the most aesthetically pleasing, with it’s red brick base and the stylised writing on the near side wall advertising the presence of the Medda Lounge. They have also now installed a few more areas of cover around the ground and with the hot topic of how the juniors will eventually slide their way into the pyramid an ever present, spurred on further by the recent Scottish Cup exploits of former junior sides Penicuik Athletic and Broxburn Athletic, Meadow Park certainly has the feel of a ground gearing itself up for the bigger challenges to come.

They also have a pretty wide ranging, if a little short stocked on the day of my visit, pie hut and having reviewed the steak and scotch pies on offer many moons ago, when this site was still nothing more than an over elaborate bet, I was pleased to see a macaroni pie for me to feast my eyes upon.

Presentation: There was an interesting presentational differential on show at Meadow Park. If you got a steak pie you were afforded a plate to go along with your large white napkin, but for a macaroni offering the napkin alone was deemed to suffice, something which I probably agree with.

CheesyPastainess: This was very tasty. A squat little pie but was filled well enough with a macaroni mix that was heavy on the cheese and was well seasoned throughout. There could be an argument made to say that it was a little salty however I think that savoury tinge helped to add a moreishness to the bite. The integrity of the macaroni held up well and overall I would have quite happily smashed into this on a plate without the pastry surround. 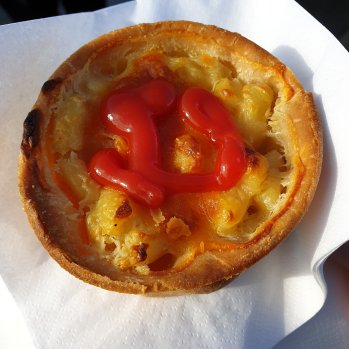 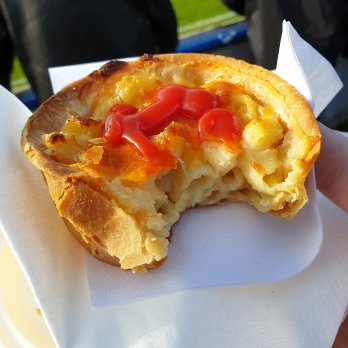 Pastry: Not that there was anything wrong with the pastry. It was baked and held everything together amicably. The deep lip at the top suggested that maybe the pastry could have been filled a little more however to have done that may have compromised the integrity of the pie as a whole.

Brown Sauce: it’s a nostalgia dab for me once against so a squirt of Heinz Tomato Ketchup added a little sweetness to this savoury bite.

This was a lovely mid-afternoon snack and once again show off the merits of a well made macaroni pie. Next up there will be a double dunt from Parklea, as Port Glasgow took on Greenock in the Inverclyde Derby underneath the Friday night lights.

Chris Marshall, is a BJTC accredited Radio Journalist with an honours degree in Communications & Mass Media from Glasgow Caledonian University. Editor of Leading the Line, A Scottish Women’s Football writer and a contributor to various football websites, podcasts and publications. A perennial ‘Scottish Sporting Optimist’ and part-time Madrileno with a passion for food and football that has manifest itself in the wonder that is Meat Filled Pastries.

One thought on “Pie 184: The Irvine Meadow XI Macaroni Pie”