What’s happening my pastry pals? I hope you enjoyed my last post where I visited Ireland to take on Pie 166: The Bohemians Chilli Beef & Chorizo Pie. This time out I’m back in Scotland and heading to one of the smallest clubs in the West Region Juniors, Newmains United, a club with ambitions to not be the smallest for long.

In my review for Pie 165: The Clydebank Breakfast Pie I talked about some of the things that junior sides in particular are doing to help grow their (and I hate to use this word but it is the right one to use) brand. Knowing that I had a planned Newmains United visit on the horizon I thought I would use this post to highlight some of the more interesting initiatives currently being undertook by the North Lanarkshire side.

One of the first things you will notice is that their Twitter account is fairly prolific, and is supplemented by content produced by a range of aspiring artist, photographers, writers etc. Whilst this use of creative volunteers isn’t unique to Newmains United it’s something that many clubs at this level still struggle to utilise to full effect. This idea was extended even further when students from local schools in the area were tasked with creating a new club badge, the one that can now be seen on their shirts today.

Speaking of shirts one of their more eye catching initiatives has been their partnership with local Indian restaurant The Pink Turban where season ticket holders (the cheapest season ticket in Scottish football) can not only get a discount when dining in the Wishaw based restaurant but also get to see the likes of Patia, Shakuti, Dopiaza and Tikka take the field as these well known curry dishes replace player names on the back of the Newmains jersey. 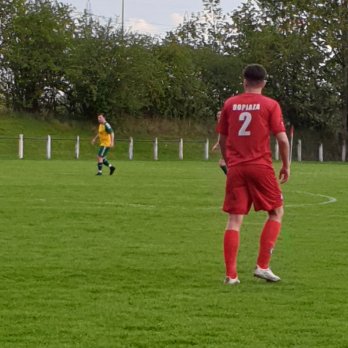 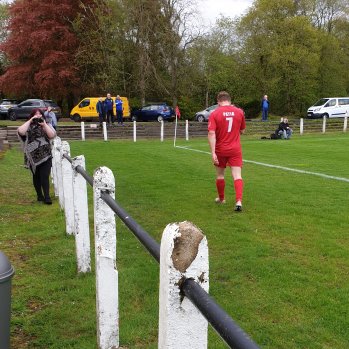 Their most recent initiative is the launch of a crowdfunding video featuring coaches, players and none other than former Scotland manager Craig Brown talking about their desire to grow the club not only on the pitch but for the community as a whole. You can view the video at the link here.

With all the work being done it only felt right that I would throw my hat into the ring by completing a pie review and so I headed to Victoria Park for their penultimate league match of the season against another one of junior football’s social media heavyweights, St Anthony’s. Without much further ado, let’s rate some pie! 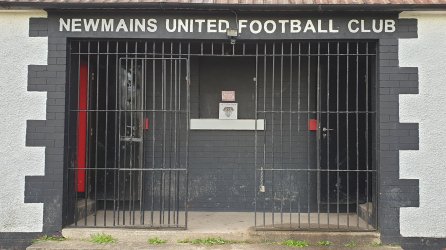 Price: At £1.50 this was a fairly priced scotch pie offering.

Presentation: This pie came upon a thin white napkin of sufficient size and girth to hold the pie with a couple of corners spare to help dab your mouth clean after consumption was complete.

Meatiness: This pie ticked all the flavour profile boxes that a scotch pie should. Was it meaty and savoury? Yes. Did it have a pepper kick to begin with and a little linger after you had finished eating it? Yes, yes it did. Did it smell like a pie? My nose certainly thought so. Sometimes getting these basics right is all you need. The texture was maybe a little loose meaning that it had to be juggled a bit but sometimes that’s part of the fun.

Pastry: The pastry had a good golden colour to it most of the way around and the little bit of boil out something that I have grown to be fond off from time to time when eating a pastry. This escaping sliver of fat from within often means that an extra fleck of meaty flavour to the pastry surrounds has been added.

Brown Sauce: For what feels like the first time in a long time I was able to squirt a solid blob of HP onto my pastry. Good times.

Overall: Pretty decent little scotch pie, has all the things you want from it. With a little more firmness to the centre and a touch more seasoning this has a lot of pie-tential to be very good indeed.

Before I wrap up this review from Newmains I also need to give a shout out to Gareth who runs the club Twitter who kept me up to date as to whether or not pies were to be had at Victoria Park for this end of the season game. There has been times, towards the end of a season, where I have been left disappointed in my pie quest, so this kind of heads up was much appreciated and again shows the efforts being made by those involved to get their side’s name out there.

Next time out I’m staying in the West Region Juniors as I head to Ayrshire to review the Cumnock Chicken & Haggis Pie. However until then, go forth and eat pie!

Chris Marshall, is a BJTC accredited Radio Journalist with an honours degree in Communications & Mass Media from Glasgow Caledonian University. Editor of Leading the Line, A member of the SWPL Media Team and a contributor to various football websites and publications he also currently acts as Heart & Hand Podcast’s resident Iberian football expert, hosting “The Isco Inferno” a weekly take on all things Spanish football. A perennial ‘Scottish Sporting Optimist’ and part-time Madrileno with a passion for food and football that has manifest itself in the wonder that is Meat Filled Pastries.

For further queries or requests you contact Chris via email at chris_mersh@hotmail.com.