Hello my meat filled mates with the turning back of the clocks I’ve hit the road to try and once again find the best football pies in all of Scotland. Towards the end of last season I wrote a piece focusing on the great junior defection to the East of Scotland Football League that sits within the SPFL pyramid structure. My original piece can be viewed here in the final issue of The Football Pink which has recently been made free to download as an attempt to help shift those Brexit blues so why not give it a look.

As I stood, because I wasn’t paying the pound extra to sit in the stand, at Beechwood Park I tried to assess my feelings on how the first season of this new era of non league football in Scotland had went and what, if any, differences it has made.

It’s fair to say it has brought some freshness to proceedings for sides in the East of Scotland. The random drawing of conferences still seems to me an odd way of doing things but it has meant that sides now have a chance to face up to some less familiar foes. There has of course been renewed enthusiasm to promote the game with one Twitter user on a mission to gather the attendances from every EOSFL game this season but has it led to increased attendances? I’m not so sure. Next season will see the EOSFL conferences shuffled based on this term’s performance it still seems difficult for those clubs at the top of this new structure to break into the Lowland League, a league which perhaps still contains clubs that would struggle when pitted against some of the EOSFL’s biggest sides. The demise of Selkirk should also act as a note of warning to clubs that moving away from the juniors will not guarantee a one way ticket to the land of milk and honey but overall the change appears to have been a positive one.

I can’t finish on this topic though without putting my junior fan hat on and it’s fair to say that with almost all of the East of Scotland heavyweights now sitting within the pyramid the Scottish Junior Cup has this season felt like a diminished competition. Whilst the West Region has been dominant in recent years the removal of these sides from the mix has meant that the games have felt more familiar and the romance that is associated with a big time East v West encounter has been lost.

Sauchie Juniors home of Beechwood Park hosted one of these cross country clashes last season as they lost 1-0 to a visiting Hurlford United in the 5th Round of the competition. This chilly spring evening though they were in EOSFL – Conference B action against Dunipace, another one of the junior movers, in their opponents last game of the season as a crowd of just over 100 watched an entertaining 2-2 draw. The big question now though, how did their pies fair?

Price: At £1.50 this pie falls slap bang in the middle of your non-league scotch pie price bracket. A price point my pocket appreciated given my forgetfulness in hitting up a cashpoint before entering the ground.

Presentation: This pie was placed on top of a thin, medium sized white napkin that just about held up under the weight of the pastry. Luckily there was also a small paper plate present. Sometimes a plate can feel superfluous but for this pastry I was thankful it was there.

Meatiness: This was a very well filled pastry although I was taken with how dark the meat appeared to be, not in a negative way, but more as a curiosity. It was a very moist pastry that meant there was a good layer of fat throughout each bite adding a strong and savoury flavour punch. That fat though did mean that the filling was loose, closer to mince than a solid block of meat, and so fell apart a little as you broke down those pastry walls. Call me mad but there was, in my mind anyway, a touch of beefiness to this pie although I wonder if the darkness of the meat meant my tastebuds were deceiving me.

Pastry: The pastry despite the moistness of the filling held up well and once lifted from the plate was somehow both soft and crispy underneath. The top was a little pale and the sides were a little cracked but overall the construction of this pastry was sufficient to just about hold things together from within. 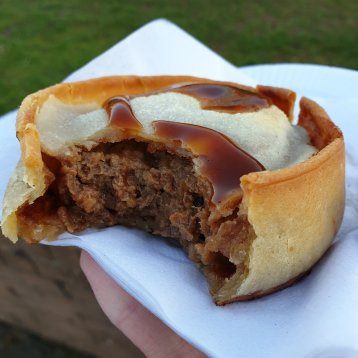 Brown Sauce: A tangy surprise in a big brown bottle.

Overall: Pretty tasty. The filling had a good smack of meaty flavour, nice texture and the pastry just about held up its end of the bargain.

Watching football as the sun sets brings a weird sense of zen into my thoughts with the view of the Ochil Hills afforded to you at Beechwood Park adding further calmness within. Next up is a review from Clyde, where I got myself a free pie, kind of, but more on that next time.

So until then, go forth and eat pie!

Chris Marshall, is a BJTC accredited Radio Journalist with an honours degree in Communications & Mass Media from Glasgow Caledonian University. A member of the SWPL Media Team and a contributor to various football websites and publications he also currently acts as Heart & Hand Podcast’s resident Iberian football expert, hosting “The Isco Inferno” a weekly take on all things Spanish football. A perennial ‘Scottish Sporting Optimist’ and part-time Madrileno with a passion for food and football that has manifest itself in the wonder that is Meat Filled Pastries.