Hello pie fans, I had a funny old day down New Cumnock way on Saturday. Glenalfton Athletic took on Pollok in what should have been a fairly run of the mill end of season West Premiership encounter. Both clubs were well clear of any relegation thoughts a long time ago whilst simultaneously being short of making any kind of meaningful title challenge. It was the kind of game in which you board the supporter’s bus with the notion that at least you’ll get a decent Saturday afternoon out.

Fast forward to the full time whistle and what started off slowly turned into a whirlwind of a game. Pollok had taken the lead through a spectacular opener but ultimately is The Glens who persevere coming back from 1-0 down to win 2-1 with the winner coming in the 89th minute, both sides having finished the game with ten men amid a less than friendly atmosphere on the terraces.

In the main I love football. It’s been pretty kind to me and I consider myself lucky that when the final whistle blows I can shake off the result (well Scotland’s recent jaunt to Kazakhstan aside, sakes!) and get on with my life because at the end of the day, through the cheers and the tears, football is just a game. As I stood there, with some questionable phrases polluting the air from a minority, I am reminded that I will never ever forget that.

On the life’s too short theme we recently had our latest Kick Cancer’s Backside Fund event where we edged ever closer to that £50,000 mark. Stewart “Smit” Smith died from Bowel Cancer just over five and half years ago now and to think that we have raised so much in his memory thanks to the support of everyone involved is all a little humbling. If you fancy flinging a few pennies our way then click the link above. I’ve mentioned it before but Smit was one of the early advocates of my meat filled ramblings so I’ll never apologise for giving the fund a plug from time to time. Anyway, that’s the preamble done so without much further ado let’s rate some sausage roll!

Price: In a strange turn of events there were no pies available for purchase at Loch Park however there were some pretty mahoosive sausage rolls. Yours for just £1.50.

Presentation: Presented in a polystyrene tray with a medium sized white napkin, The tray was used for the sausage rolls and multiple chip variations but strangely not the burgers. From a pastry perspective this is perhaps one of the most secure methods of holding a match day snack safely although it’s important to ensure that you place your pastry back in the centre of the tray to prevent any accidental flippage.

Meatiness: So earlier I said that there were no pies at Loch Park this particular Saturday and I suspect when the good folk at the Glens went to pick up their match day meatiness there may not have been any sausage rolls either. So why do I suspect this? Well the filling in this sausage rolls appeared to be cut up rectangles of square sausage as opposed to the more traditional link style sausage meat filling. It was a very generous, moist and meaty portion of square sausage and whether this was done by design or as a result of some Saturday morning quick thinking I was a fan.

Pastry: My suspicions grew when I looked at the way the pastry was wrapped around the meat. No frills or crimping here, just a layer of puff pastry wrapped round the meat and pushed together to guarantee a full encasing. This roll had a good golden colouring to it although the bottom was a little greasy perhaps as a result of the higher fat content in a square sausage and what felt like a fairly generous ratio of butter in the pastry mix itself. Still though a big sausage filling needs a big pastry coating and this did the business. 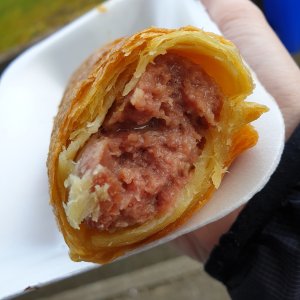 Brown Sauce: A sausage roll is not a pastry that receives saw easily and so for me I never do adorn it so.

Don’t do sausage roll reviews very often so this was a nice change of pace. As always keep up to date with Meat Filled Pastries by subscribing to get notifications and follow all my non-pie based going’s on over on Leading the Line, however until next time, go forth and eat pie!

Chris Marshall, is a BJTC accredited Radio Journalist with an honours degree in Communications & Mass Media from Glasgow Caledonian University. A member of the SWPL Media Team and a contributor to various football websites and publications he also currently acts as Heart & Hand Podcast’s resident Iberian football expert, hosting “The Isco Inferno” a weekly take on all things Spanish football. A perennial ‘Scottish Sporting Optimist’ and part-time Madrileno with a passion for food and football that has manifest itself in the wonder that is Meat Filled Pastries.