Hello pie fans and welcome to Meat Filled Pastries where 150 pies were clearly never going to be enough.

As the years have ticked by I’ve had to keep track of those venues where I’ve had a pie before. When pulling together the infographic for Pie 150 I noticed I had somehow managed to do not one but two reviews from Rossvale. A stat made even more befuddlingly when you consider that neither had came from their current home at Huntershill  and that I had also managed to squeeze in a bridie review from the same club. At least with the bridie it could stand alone as part of the extended Meat Filled Pastries family. With that in mind I arrived at Cumnock knowing that I had previously reviewed both the scotch and onion pies fairly early in my journey and so I anticipated my culinary peak from Townhead Park to be the drinking of the rarely found 60/- from the Ayrshire side’s rather good social club.

My assumption however was wrong because as I approached the pie stall to get involved with some “Nock Nosh” I was greeted by the geuninely excited chatter from my fellow match day munchers that there were two new types of pies to sample. In the least surprising revelation of this post one of these new breeds managed to fall lovingly into my palm and so, without much further ado, let’s rate some pie! 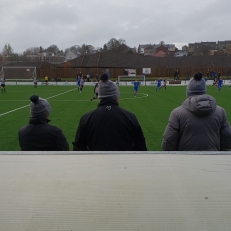 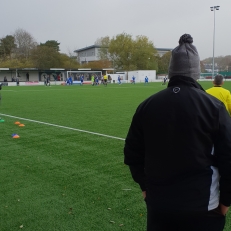 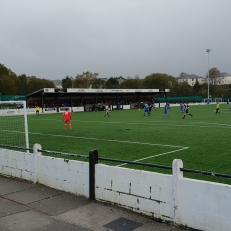 Price: At £2 this was at the top end of the junior pricing spectrum but given that I was on a promise of both steak and haggis I was more than willing to let this pastry whisper sweet nothings on my taste buds before deciding if I was getting value for money.

Presentation: Despite its steaky nature this pie went old school, presented as it was on a single medium-sized (maybe evem large) white napkin. As consumption progressed this proved more than plenty. 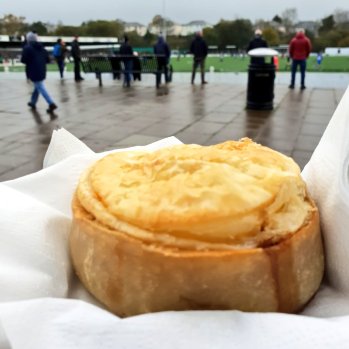 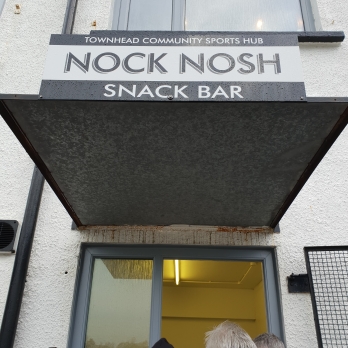 Meatiness: On entry to this pie I wasn’t quite sure what to expect. Should there be lots of gravy? Will this marriage of haggis and steak mingle into a meaty morsel that will make my mouth moist with its magic?

I’m happy to report that the filling of this pie was indeed a belter. At first my taste buds were hit with a smooth but spicy punch of haggis, a flavour that is instantly recognisable to the initiated but almost indescribable to those yet to experience the joy of an offal stuffed lamb’s stomach. Immediately I deduced that there was no gravy to be found but that was not an issue as the moistness provided by all those bits that North America continue to hide from were ample and slowly gave way to large chunks of well cooked and tender steak. This filling was getting “the nod”. That moment when your head, mind and taste buds come together in unison to proclaim that the symphony of flavours that you are experiencing are in fact very, very good.

Pastry: The pastry on this pie was also very near the top end. The sides and base were well cooked and held firm against the moist filling although they were perhaps a little peely wally in colour. There was some boil out, and whilst that is sniffed at by some, I always feel it adds some character to a pastry. A little imperfection to help make it feel special. The colour shone as you gazed at this  pie from above, the top formed as it was with a lovely golden disc of puff pastry that broke off into buttery flakes whilst the underside merged with the filling below. This pie was pulling out all the stops. 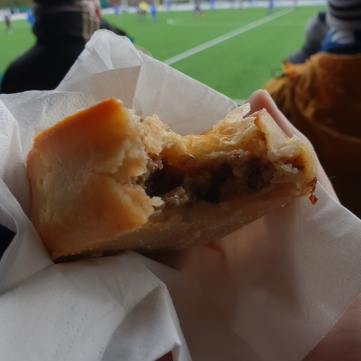 Brown Sauce: I’m almost compelled to say that brown sauce may have ruined this pie, which is a very bold statement indeed.

This was a wonderful pastry surprise to come across on a dreich Saturday afternoon and it’s equally wonderful to see lower league football clubs and their providers identify the opportunity to expand their range. I will maintain until my dying days that a “killer” pie will do as much good for a side as a decent cup run or title challenge ever will especially when performance on the pitch is infinitely harder to control.

Next up I continue my quest to champion the women’s game as I attend the Scottish Women’s Cup Final between Hibernian and Motherwell where perhaps surprisingly I embark on my first review from Firhill, home of hipster’s choice Partick Thistle.

However until then, go forth and eat pie!

Chris Marshall, is a BJTC accredited Radio Journalist with an honours degree in Communications & Mass Media from Glasgow Caledonian University. He has contributed to prominent football sites including Pie & Bovril, The Terrace Podcast and  The Football Pink as well as featuring in The Scotsman, STV and a number of other media outlets. He currently acts as Heart & Hand Podcast’s resident Iberian football expert. A perennial ‘Scottish Sporting Optimist’ and part-time Madrileno with a passion for food and football that has manifest itself in the wonder that is Meat Filled Pastries.

[…] time I was at Townhead Park, home of Cumnock Juniors, I managed to nab myself one of their Steak & Haggis offerings so I was secretly quite pleased when they said that these had sold out and there was only […]