Hello it’s not only time for another pie review but it’s also time for another pie of the month from the house that staunch built, Ibrox Stadium. When I turned up at Ibrox on Armed Forces Day I had told myself that no pies would be passing my lips as I had been well and truly burned out by not only the price but also the quality of pastries in Glasgow’s big three grounds over the years.

This came to a head at Hampden the other week. I had first reviewed the Hampden Steak Pie a long time ago now. In fact it was one of the very first pies I reviewed and it seemed to do OK under scrutiny however since then I have been subjected to a number of overpriced travesties with a particular shout out to the Queen’s Park Cheese & Onion Pie – still possibly the worst pie to ever pass my lips. My last Steak Pie at Hampden though was quite frankly taking the piss.

At £2.90 this…this thing(!) masquerading as food has almost certainly forever left me scarred in regards to the catering efforts at the current – and now future home – of Scottish football. The pastry was welded to the case so hard that I could turn it upside down without fear of it falling out. The lid came clean off and the filling was so sparse and dry I can only assume that when this was made that is was not so much as baked but chewed up and spat out into it’s pastry shell. It was an absolute liberty, and I hope when that whatever the renovated Hampden ends up looking like that a new catering contract with somebody who actually gives a f*ck about what they’re producing is dished out.

It made me proper angry and with it’s memory still scratched across my taste buds I turned up at Ibrox knowing that it was highly unlikely that I would be purchasing a pie, and I love pies! But then it happened. I fell into their trap. A new Pie of the Month was there to be had and so with some reluctance I cleaned out my savings and purchased, what was a promising sounding, Chicken & Chorizo Pie. Did I make the right decision though?

Without much further ado let’s rate some pie. 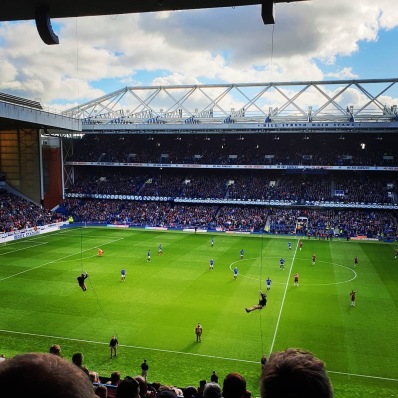 Price: It was £3.50. I’ve already ranted about the price of pies at the top table of Scottish football in this post and many times before so I think you know my feelings on this by now.

Presentation: Having had August’s pie of the month – The Rangers Bacon Mac & Cheese Pie – I was struck with how this month’s edition looked exactly the same presented as it was in a round aluminium tin and on a fairly large white napkin. Before I attempted a first bite things were actually looking pretty good.

Meatiness: There’s no hiding it, the filling of this pie looked like spew. It was that off white colour that years of television vomits has told us a right good whitey should be. There were some small chunks of chicken accompanied by smaller studs of chorizo sitting in a very thick paste-come-sauce. To be fair it actually smelled pretty good but given its appearance as the lid of the pie came clean off when I ventured to take my first bite (more on that shortly) I found myself debating whether or not I really wanted to dive in. A feeling that I sensed was being felt by the person sitting diagonally behind me as I tried to figure out what was going on inside this pastry.

Continuing with the flavours and I would challenge anyone to add chorizo to something and not manage to draw some kind of flavour out of the final culinary masterpiece. In this instance it was the saving grace as at one point I genuinely had to check that the chunks of white in the pie were indeed chicken due to the paucity of flavour they provided. It was also a little heavy handed on the salt meaning that somehow the final result was a filling that tasted of everything and nothing all at the same time. 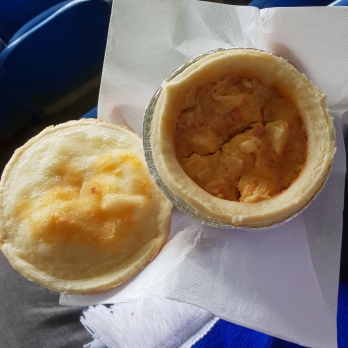 Pastry: An anaemic looking disaster. The base so raw that it not only stuck to the bottom of the tin but that it could also be rolled up into wee balls between your thumb and index finger. Once mashed in with the paste masquerading as gravy it was not good. Whilst under baked pastry is a common fault the way in which the lid of my pastry came clean off was a novelty I hadn’t yet experienced. I’m not talking a little loose either, I’m talking about the fact the two parts were never stuck together in the first place. Whilst this would go down like a lead balloon in pie judging circles I was strangely grateful as it meant I had a full disc of pastry to try and spoon the filling out with. A relief given it was impossible to lift the thing from it’s shiny shell.

Brown Sauce: I think brown sauce would’ve actually made this pie even weirder.

Overall: A marketing masterstroke for a mug pie punter like me – yes. A tasty pie – afraid not.

I genuinely want to know what kind of checks gets done by these large scale event caterers on the day of the match because if they check some of the riots that I’ve mentioned in this post and say that they are good then clearly I’m in the wrong business.

Anyway I have another pie review lined up for next time from Ayrshire junior side Kilwinning Rangers and their eponymous “Buffs Pie”. Until then though, go forth and eat pie!

Chris Marshall, is a BJTC accredited Radio Journalist with an honours degree in Communications & Mass Media from Glasgow Caledonian University. He has contributed to prominent football sites including Pie & Bovril, The Terrace Podcast and  The Football Pink as well as featuring in The Scotsman, STV and a number of other media outlets. He currently acts as Heart & Hand Podcast’s resident Iberian football expert. A perennial ‘Scottish Sporting Optimist’ and part-time Madrileno with a passion for food and football that has manifest itself in the wonder that is Meat Filled Pastries.