Welcome to another edition of Meat Filled Pastries and my first foray into the Lowland League this season but before we get into that let’s talk about the Fringe. Edinburgh’s month-long festival of comedy, music, dance, arts, cinema etc. is not somewhere you would usually associate with the humble pie. I mean, there will almost certainly be a food stall or two offering you this meaty staple and the word pie itself is rife with the kind of innuendo that an easy joke is made for – I should know – but all in all, barring a rather grisly murder reference in the Shakespeare tragedy Titus Andronicus where two victims are baked into a pie, it isn’t necessarily renowned for its theatrical prowess. Enter The Pieman Cometh. A Scottish football comedy that I took a trip to see during the week.

It’s safe to say that I may have been one of the few people to fit into the middle part of their target audience Venn diagram, given my love for both football and pies, and if I didn’t know better then I would have thought this play had been wrote specifically with me in mind. Like most shows of which I have no prior knowledge of I went in with fairly low expectations but I am pleased to report this was actually pretty enjoyable. The story is an often told one around the pitfalls of football finance and for some it will be all to familiar. Although there was nothing overly ground-breaking the perspective and narrative were both good. Some of the characters especially the elderly fan were strong and in this instance particularly relatable. The jokes came round often enough to keep you going and although the ending felt a little abrupt I’d recommend it as a decent way to spend an hour in Edinburgh especially if you have a fondness for football.

Arts critique out the way let’s move on to some more familiar ground, and so without much further ado, let’s rate some pie! 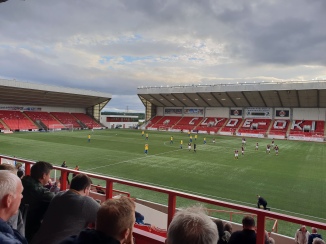 Price: A fairly substantial £2 for a scotch pie sees this pastry priced more at a Scottish Championship level. It’s also extremely prudent for me to mention that I had to wait until just before half time for my pastry which – given the Friday night kick off – was also doubling as my dinner. I also noticed that they ran out before the half time interval was over, always a bone of contention for football fans.

Presentation: Presented on a medium-sized, if perhaps a little thin, white napkin. Just enough to support the pastry during consumption and mop up your face afterwards.

Meatiness: On first appearances I had my suspicions about where this pie came from, but what my meat filled trails have always taught me is always to take each pie on its individual merits. This pie was pretty good. The meat was well textured and had a good hit of pepper on the after bite. It was also the first pie in a very long time that had a little greasy dribble fall down my fingers. Not necessarily a bad thing, and in some ways it was weirdly nice to see the fat almost instantly harden in the ever Siberian-esque Broadwood conditions. It was perhaps a little flat in terms of quantity when checking the ratios against the pastry but all in all was tasty enough.

Pastry: This pie had a perfectly smooth top and the trim had earned itself a nice golden colour in the oven. Both the lid and base though were perhaps a bit too thick and as a result were slightly under done and a little bit doughy to the bite. It was however incredibly sturdy and I had little fears about losing and filling to the cold stone terracing below.

Brown Sauce: Yes, the pictures don’t lie. There was no sauce options on offer here. I don’t think in over six years of reviewing pies this had ever happened before and I’d hope it doesn’t happen again.

Overall: This pie tasted pretty good but the pastry was a little thick and the lack of condiments and running out are both match day catering faux pas’. Having managed to get one though I was happy enough.

So a decent pie with a few teething problems on review of the overall pastry eating experience. Next up a return to the juniors for the first day of the new West Premiership season and a review from Renfrew.

So until next time, go forth and eat pie!

Chris Marshall, is a BJTC accredited Radio Journalist with an honours degree in Communications & Mass Media from Glasgow Caledonian University. He has contributed to prominent football sites including Pie & Bovril, The Terrace Podcast, The Football Pink as well as featuring in The Scotsman, STV and a number of other media outlets. He currently acts as Heart & Hand Podcast’s resident Iberian football expert. A perennial ‘Scottish Sporting Optimist’ and part-time Madrileno with a passion for food and football that has manifest itself in the wonder that is Meat Filled Pastries.

One thought on “Pie 140: The Cumbernauld Colts Pie”

[…] Sauce: After the Cumbernauld Colts debacle we returned to routine with a splash of brown sauce to help enhance those spiced meat […]