Aye alright I know this isn’t a pie, but it is a meat filled pastry, and given the successful tasting experience that was Pie 129: The Girvan Scotch Pie it would have been remiss of me not to give this a bash whilst I was in the area.

More on that in a minute but speaking of things that aren’t quite pies it would be equally remiss of me not to mention the launching of a new venture from your intrepid pie eater. For nearly five years I have travelled the country and beyond tasting a wide variety of pies, pasties, sausage rolls and bridies, casting judgement on what I believe to be a good meat filled pastry. I have also for a large part of that time been a frequent visitor (including a few months as an inhabitant) to Spain where they and their Latin American cousins share my passion for a good pastry.

So what does this all mean? Well I am happy to announce a new venture: Empanadas Escoces. My attempt to bring the best of hispanic pastries to Glasgow and who knows maybe beyond. I have no idea how this will go. It could be a disaster. It could be a runaway success. Either way I’m going to give it a bash and see what happens. I’ll no doubt post the odd update on here but if you want to keep up to date with everything as it happens then you can follow @empanadassco on Twitter & Instagram whilst you can also find news on Facebook by searching Empanadas Escoces. If this site has taught me anything over the last few years it’s that you never know until you have a go.

With that public service announcement out the way, let’s get back to the reason why you all came here in the first place. Without much further ado, let’s rate some sausage roll!

Oh by the way, this is Ronnie, he’s one of the regular home and away crew when going to Pollok games. There you go son you are now pie famous. Anyway…

Price: £1.20. Exactly the same as a pie. It’s funny but sometimes the price of a sausage roll (or any other non pie pastry for that matter) can vary greatly when compared to the prince of pastries so it was good to see a consistent price point here.

Presentation: With a sausage roll the napkin has an added significance as instead of being used to place your pastry on it is almost an automatic reflex to wrap said roll in its soft white paper duvet. In this instance the size of the napkin was more than sufficient. 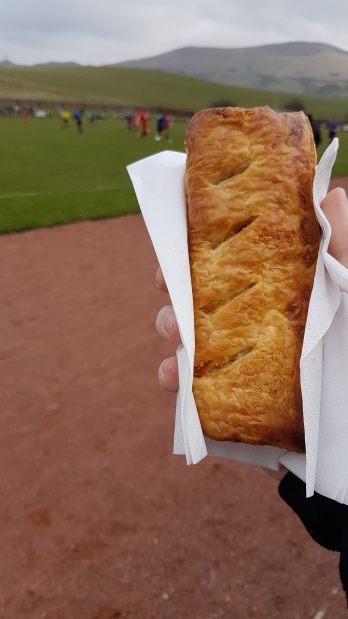 Meatiness: On first looks, as I hope this picture illustrates, this was a massive roll. This, perhaps surprisingly, had me a little concerned as usually big appearances mean that the meat to pastry ratio can be way off, and in some cases downright unacceptable. I am happy to report though that on this occasion the meat content just about made the grade. A puff pastry case will always struggle to compete with a hot water crust when it comes to meat content percentages but with this pastry I felt I was getting a decent sized banger for my buck. The sausage meat had a nice texture with the levels of fat just right to add moistness whilst the meat itself was very tasty. One thing I did notice as I made my way through was the presence of a yellow smear on top of the sausage meat. My only conclusion is that it had to be mustard and if it was it certainly didn’t distract my taste buds during the eating experience.

Pastry: Whilst there was lots of pastry (perhaps a little too much) there was no doubting the quality of the bake. The layers evenly split and flaky whilst the colour on the outside was golden and even. One of the common fall down points for a sausage roll can be the pastry slipping off and you being left with a limp sausage dangling from your fist shorn of its pastry sheath. In this case there was no risk of that happening.

Brown Sauce: Logistically, for me anyway, condiments on a sausage roll just don’t make sense. They slide off, have nowhere to realistically gather and in general are just a bit of a mess.

Overall: Excellent if slightly too plentiful pastry wrapped around some well-flavoured sausage meat. What was that yellow substance though?

Well I think it’s safe to say that Girvan has gone on the list of “good football eat locations” with a more than solid scotch pie and sausage roll offering. Well played. Moving on and for fans of the pie reviews this weekend I took a trip to Bathgate Thistle who’s pies are supplied by a former 2x winner of the World Scotch Pie Championship so that will be going on the site soon whilst my International Soccer Scran Series will next take us to Nuremberg. So plenty to look forward to but until next time, go forth and eat pie!

Chris Marshall, is a BJTC accredited Radio Journalist with an honours degree in Communications & Mass Media from Glasgow Caledonian University. He has contributed to prominent football sites including Pie & Bovril, The Terrace Podcast, The Football Pink and The FBA’s as well as featuring in The Scotsman, STV and a number of other media outlets. A perennial ‘Scottish Sporting Optimist’ with a passion for food that has manifest itself in the wonder that is Meat Filled Pastries. He’s now taken this passion further in the form of Empanadas Escoces a venture inspired by the taste of Spanish pies and a desire to bring them to Scottish Shores.