Finally after what feels like eons, it’s time for a new pie review. Well that’s not strictly true as last month I once again dusted off the net lined hat, tow my white coat down from it’s trusty hook on my bedroom door and headed to my second Scottish Baker of the Year Judging Day in the Kingdom of Fife.

WHist the Scotch Pie Championships focus soley on the pie and is very much incumbunt on the piemaker deciding that their pie is the best of the best Scottish Baker of the Year relies on over 22,500 customers to pick their favourite baked goods from across the country. Split across seven categories I always worry about the early on-set diabetes that the cakes and biscuits sections will bring the judges there, whilst the idea of judging 100’s of loaves, looking for a grain even slightly out of place to differentiate between good and excellent, is to daunting a task for this man. 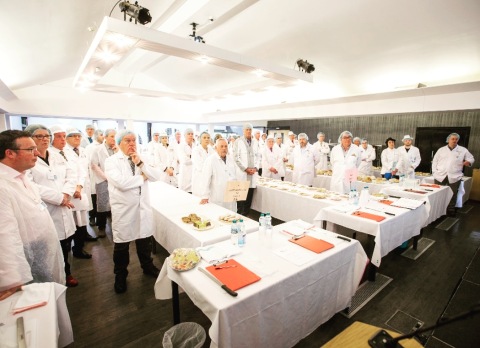 Luckily though, I was placed on home turf in the savoury pastry section and over the course of 4 hours me and my fellow judges heated, cut, fondled, sniffed and tasted 151 savoury treats all in the hope of finding the ultimate in Scottish savoury pastry cuisine. It’s always a fun if somewhat filling day and I think the winner is a belter, but to tell you what that is I’d have to kill you so whilst we wait for that announcement next month let’s get elbow deep into a pastry I can talk about, the latest entry into Meat Filled Pastries catacombs, the Girvan FC Scotch Pie.

So without much further ado, let’s rate some pie.

Price: £1.20. As this journey of pie enters its fifth (yes fifth!) year it’s still heartening that you can find a pie that won’t break the bank. £1.20 for a hot meal will always be a bargain. 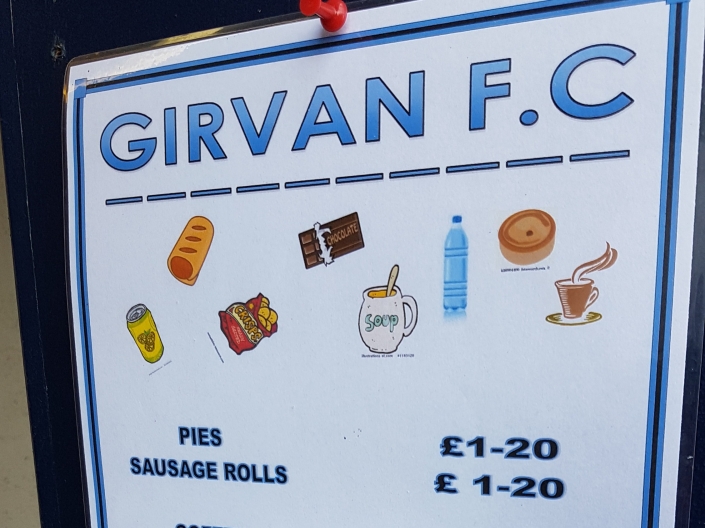 Presentation:  A classical presentation style with the pie being presented on a medium-to-large white napkin. Ample room to hold the pie and dab the corner of your mouth at the same time.

Meatiness: As the small sign on the heater proclaimed this was very much a butchers pie. The fill was generous to the point of bursting with the meat well textured and perhaps just a little bit coarser than you would normally expect from a scotch pie. Whilst scotch pies are usually kissed with pepper and mace, along with what ever other secret spices the producer decides to use, this pie was seasoned simply with salt and pepper allowing the flavour of the meat to really sing. The meat was savoury and although it took a couple of bites for my palate to tune in to this filling, once it did, I found myself nodding along with every bite, a sure-fire sign that this was indeed a tasty pastry. 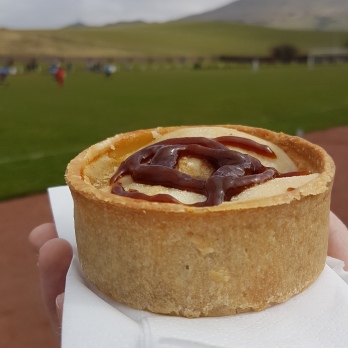 Pastry: The good news continued with the pastry, I mean look at it! Not only incredibly neat but also golden around the bottom, top and sides with not a hint of under-baking where the meat meets the pastry, something that was strangely all too prevalent on the aforementioned judging day. It held up well to the bite and at no point did I feel a juggling motion was required to prevent spillage.

Brown Sauce: HP. It appears there really was no messing about with this Girvan Pie.

Overall: Now maybe because it’s been a while since I’ve done one of these reviews but this was a really good scotch pie. The filling was meaty and tasty despite not having my favoured pepper kick. The pastry was near as perfect as I’ve seen at a football ground and overall I contemplated on more than one occasion getting another one.

Yes, that was some good pie, and as I mentioned I very nearly went and got a second but then, the next item down piqued my interest and it’s gargantuan golden glint caught my eye which is good news for you dear reader as next up I will have a second review from Girvan in the form of a, rarely seen on these pages, sausage roll.

I also have another edition of the International Soccer Scran Series I’m working on so the content will keep on coming before the seasons over. But until next time, go forth and eat pie!

[…] a pie, but it is a meat filled pastry, and given the successful tasting experience that was Pie 129: The Girvan Scotch Pie it would have been remiss of me not to give this a bash whilst I was in the […]