Welcome back to another edition of Meat Filled Pastries where we’re always on the hunt for some meaty thrills whilst holding back on the spills because a spilled pie leads to a sad guy.

Now unless you’ve been living under a rock for the last couple of weeks we have seen the dawning of a new year and with it the thoughts of new hopes and expectations that it will bring. I’m not one for the phrase “New Year, New Me” philosophy that blights social media for those first few days of January but I do see it as an opportunity to set some goals and try new things.

It’s also the time of year where people declare their body a temple and health boards and charities across the country champion well-meaning campaigns such as “Dry January” and the awfully named “Veganuary”. Now this may perhaps come as a surprise to some but I am quite happy to eat a meal without meat, in fact when you consume the volume of Meat Filled Pastries that I do it is somewhat of a treat. However with that being said I cannot get on board with replacements such as “Facon” and “Tofurky”. I’ve got in to many a debate about this with non-meat eating friends before but for me if you don’t want to eat meat why are you then replacing it with things that look and (supposedly) taste like the things they don’t have any interest in eating? It’s an endless riddle to me. Most vegetarians are sound and rational people. Most vegans however, are in my experience (bar the odd exception), raving lunatics who must burn all of the 150 calories they consume a day telling the world that if you eat meat you deserve to burn in the depths of hell for having the audacity to like the occasional chicken nugget. It’s not my fault you’ve chosen a life of cauliflower “steaks”. I accept that as your life decision so don’t come preaching, and I mean preaching, to me because I don’t agree. All of which, kind of ironically, brings us to today’s pie review; The Queen’s Park Cheese & Onion Pie, a veggie (but not vegan) friendly option at the much debated home of Scottish football Hampden Park. 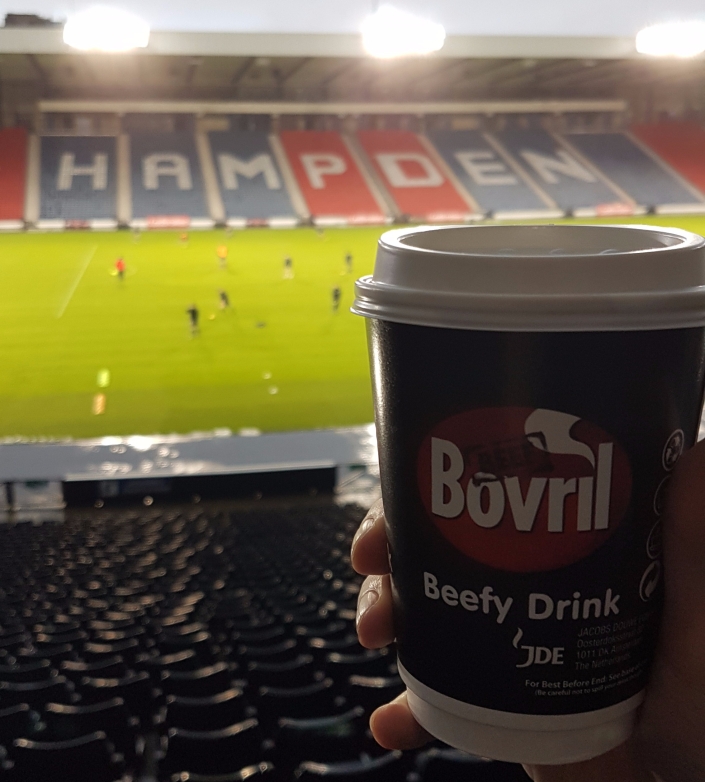 Price: A whooping £2.70. For a pie with zero meat in it. Now I’m making an assumption here but I’m guessing that pie prices for Queen’s Park games are dictated by someone other than the club as history has shown that a pie at a Scotland game will cost you exactly the same for a (supposedly) much higher level of football. I’m not even going to begin to claim to the understand the economics behind Queen’s Park playing at Hampden, and for what it’s worth I think they should continue to do so, but £2.70 for a pie definitely needs looking at when compared with their League One peers.

Presentation: The tin foil case of potential doom accompanied by a large white napkin for mopping up at this point the unknown treasures within.

Cheesy-Onionyness: Sigh. This was fairly rubbish. Always a disappointment in the pie game. Inside this pie was a mushy yellow and white paste that I presume was meant to be rich and cheesy with a strong onion linger in the background oozing as you pull away each bite and where you try to stop a small string of cheese getting stuck in your beard. Positively dreamy.

What actually happened was the appearance of a bland blob that tasted more of uncooked roux and a hint of cheese tainted with a pepper kick so offensively strong that the acrid burn stabbing at the back of my throat resulted me going and having to get a second beverage. On review fairly rubbish seems far too genteel. This was looking to be a bit of a disaster and then there was the pastry… 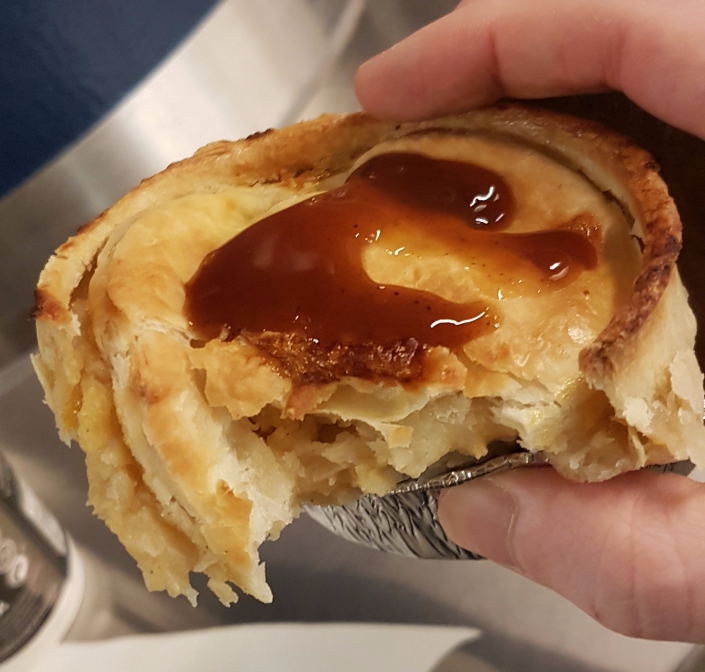 Pastry: I have often talked about the pit falls of the tin foil case. A Sophie’s Choice of a decision for butchers and bakers between the appearance of uniformity and the risk of the pie sticking to the bottom of the case. It’s a risk that often backfires and in this instance the result was no different as half my pie stayed glued to the bottom as I lifted it to take my first bite. The pastry on the top edges was golden and crisp but at the base was as near to raw as I think I’ve ever had at a football game. So raw infact, that I could actually leave a thumbprint in the bottom with the mixture of filling and pastry creating a texture that I’m sure could be used as a Play-doh substitute at a nursery. I can’t think of the last time I thought, “I might not even finish this” but it was really that poor. I am however a trooper, and so I powered through like any good pie muncher should.

Brown Sauce: Regular readers will know that a luxury pie (i.e. a non-Scotch Pie) does not get dotted with some of the brown stuff but given how consumption had gone to this point I thought I’d grab a sachet to try and save it. Sadly, even this most wondrous of condiments couldn’t prevent me from experiencing culinary doom.

Overall: This was not very good. The filling was bland but yet somehow offensive and the pastry was near raw and stuck to the case. If you go to a Queen’s Park game I’d avoid this and stick to your traditional Scotch or Steak. If you’re feeling fancy wire into a Chicken Curry but if you’re a vegetarian I’d just settle for a Mars Bar.

Well that was disappointing. It’s often said it’s easier to criticise than praise but for me the purpose of this site is to champion the best pies around the grounds and beyond and so when I’m met with something bad it’s a chore to break it down. That said, if I’m not honest and go about proclaiming every pie as the greatest I’ve ever had then I lose all credapie-ility.

Next up is a first review from Clydebank, something I couldn’t quite believe when checking the archives before the game so hopeful we see a return to pie glory. But until next time, go forth and eat pie!

I was at Hampden last week for Queens Park vs Stranraer… the scotch pies weren’t much better than this by the sound of it. Near cold on the bottom and barely any taste to the filling, and the same sky high price.

It’s the main pitfall of pies at big venues. Queen’s are definitely in a unique situation at Hampden. Cheers for the read and the comment 👍

[…] then I have been subjected to a number of overpriced travesties with a particular shout out to the Queen’s Park Cheese & Onion Pie – still possibly the worst pie to ever pass my lips. My last Steak Pie at Hampden though was […]

[…] the worst pie I have encountered of my now many years of travels though, that accolade belongs to Pie 126: The Queen’s Park Cheese & Onion Pie. A pie that I described at the time as both “bland and yet somehow offensive” with […]

[…] I’ve spoke in the past about my lack of love for the Queen’s Park Cheese & Onion Pie, so I approached Hampden’s vegetarian offering for the day with a bit of trepidation, a […]